The following pages are an invitation for you to add your memories/anecdotes, via the editor, to any of the drop-down categories. Also please feel free to suggest other titles. This is only the beginning and the future depends upon you.

I have been toying with the idea of having a Teacher's section but have the feeling that it might be a Red Rag to many Raging Bulls. The recent spate of emails regarding Bill Bayliss who died in 2007, being a point in question. (Please note that the emails in question refer to a list of Barnsbury Boys who are currently in contact with one another).
Still, we have the right, having been subjected to the capricious whims of those who purported to teach us, to have our say, and I admit that some of the stories about those teachers which were discussed in previous emails, have surprised me. I must have walked around the school blind. Actually, I did, because I would not wear my glasses.

Retirement. Tell us what you are doing.

Obituaries. Friends have died and only a few remember them. Please remember them here. Dear Johnny Pearce went around for twenty-five years telling us that John Scaffardi was dead. Happily, they both turned up for a reunion at my home in 2007 and John S, still alive, emailed me just the other day. I'm glad he has a sense of humour. 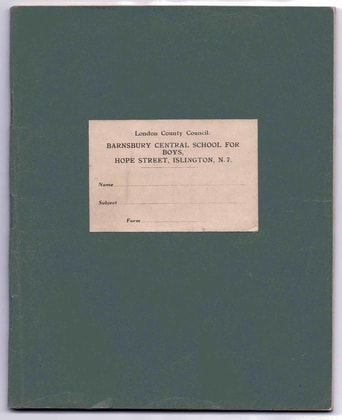 Two views of the Bible issued to Barnsbury Boys.

Leslie Wallage
Hi everyone. Do any of the GoBBs remember being given a Bible when they first went to Barnsbury?. (I think every boy was issued with one).

I am not by any stretch of the imagination a religious person and I have moved home about 15 times up till now, but somehow I have managed to retain the Bible issued by the school. It currently sits in the drawer of my bedside cabinet, a bit like a Gideon's bible in every hotel throughout the world. Has anyone else managed to keep their Bible?

John Fairbanks
Yes, I also have mine issued in September 1959. It has my name inside written by Cyril Madeley (in his italic script) who, I believe, acted as headmaster of Eden Grove at that time.

As it is a King James Bible. It doesn't get a lot of use at current church services where more modern versions are used.

Mickey Isaacs
I had one sometime in the first year. I think everyone one my class had one. I have mine still, mine had a blue jacket and cover though.

Paul Kenealy
I often wondered where my Bible had come from, it’s moved house at least six or seven times. A bit battered now; so much so the front picture is missing. Presumably the inscription with our names on is on the back of the front picture. I seem to remember Mr. Madeley was deputy head in September 1958 when I started at Eden Grove.

I have looked at the front page of mine which is slightly different, but still has the names of John Sterling, Editor and drawings by Horace Knowles. Published in 1958 by Oxford U P, Cambridge U P, Eyere & Spottiswoode and Collins on behalf of British and Foreign Bible Society.

As  my Mum was a Sunday School Teacher, our house was full of bibles and hymn books, but this is the only copy I have, I don’t think I’ve read it since I was about 15, maybe I’ll give it a try.

John Tythe
I had to give mine back. Couldn’t see the sense in that, as the school closed for good at the end of that term 1966 and they were not re-issued to anyone anyway.  Perhaps they got scrap value for them.

Alan French
Why would anyone ask for a Bible back? Obviously they did. The idea is to spread the good word. I know recycling is the vogue today but that is taking things too far. I guess your name was written in it.  I wonder if it finished up at a car boot sale? Crazy!!!

Photoshop Chris
I think the Barnsbury girls did one better than us GoBBs. Their Bibles were colour illustrated and had a proper glossy covering. See below; my wife's Soulla's own school bible. Yes, she is a GoBG. They were also given Hymn books which she also has to this day.

Alan French
Great picture. This could only happen for the girls, making us lads feeling inferior.  I mean, colour pics!  I'm thinking of setting up a self help group and calling it 'The Militant Male Suffragette Society'.

John Fairbanks
Your Best bible cover is very posh, with the illustrations, etc. Mine is just plain maroon, but does have illustrations inside.

Tam Joseph
I think I had one but it disappeared years ago but what I do have is small wooden box  with a bevelled handle that all who attended the woodwork class had to make.

An exercise book issued to a student of Barnsbury Central School for Boys, Hope Street, Islington. N7. circa 1934. This is the Eden Grove School. Anonymous donor to the archives.