I left school at sixteen. My first job was at an ironmonger wholesale company, Gibbons and Skinner situated in Wharf Road, Islington. My second job was where I really wanted to be; in Tin Pan Alley - Denmark Street, at Southern Music Publishers. This job set me down among some of the people that inspired me, the year 1966. I was in the company of many famous musicians.

After a short illness I had one other job in an engineering factory trying my hand at centre lathe turning.

Whilst having this job I auditioned for a group and joined them immediately, they were called The Followers. The Followers were already established and gigging mainly around North London and especially in the Hackney area.

The Followers had a residency at the New Crown on St Paul's Road on Friday and Saturday nights for about three months. One night we were approached by a stranger who told us he could get us a gig in Germany which meant we had to leave our jobs and turn professional. This was music to my ears, my ambition, he even sorted our passports. American Airbases here we come. Our drummer Sid wanted to drop out so we answered an ad in the Melody Maker and got another drummer, Dave, only sixteen and really promising. To complete our lineup for Germany we needed a girl singer and luckily found Jenni, a really good soul singer. 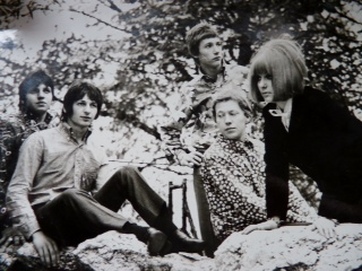 So we are reformed as Dr. Marigold’s Prescription, a phrase I found in a short story of the same name by Charles Dickens, ready to brave the trip to Germany; it’s 1967. No full time income and not much of a set list. Oh dear, surprise surprise, the whole thing fell through, and we fell for the Golden Promise.

All was not lost. Dave went hunting around W1 looking for work. He found an agency run by a man called Peter Harrison in Archer Street, just off Windmill Street, right opposite the Charlie Chester Club. Peter offered some work, funnily enough in American Airbases in England. Well we never had to leave the country to play at these venues.

​We quickly rehearsed a set list knowing that the soldiers had vastly different tastes in music. There were on one side, the Soul Brothers and on the other, the West Coast Surfing fanatics. However, we were a versatile unit and could play Beach Boys, Jan & Dean, Otis Redding, Wilson Pickett, Sam & Dave, Joe Tex, Ike & Tina Turner and more.

We only had a J Type van. Short of cash we went to the extreme of cruising downhill out of gear to save money. That van was so small, with Bill driving, Fred and Jenni in the front and Dave and myself crouching behind the back door, in between the amps and instruments. I well remember Dave or myself holding the back door open with a metal coat hanger so we could get some fresh air in to combat the petrol fumes. Most of our trips were on the M1 in those days.

Ed - A book by Peter Harrison titled, B B C - Brixton Boy Calling: Rock Music Agent/Author/Producer  was published September 8th 2013 by CreateSpace Independent Publishing Platform.  The book can be purchased online at amazon.co.uk for £7.26p + p&p. 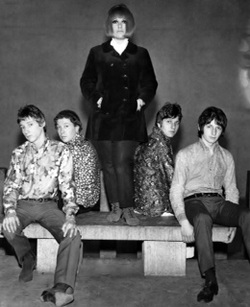 Meeting up at Caledonian Road Tube Station in full view of the Police Station. This could have been our very first visit to American Airbase Chicksands near Luton. It would have been a rough ride but we were young then. Route A1 M1 Luton turn right Chicksands. My first impression, well a new town. Next up the American Football Stadium. All was very calm.
​
We had a great welcome, shown straight to the bar and ordered the Schiltz beers. Iced cold beer, not used to this. Next up the food, T bone steak sandwiches.

Carry the Amps Drums Microphone Stands and Instruments in the side door, set them up. Kelly's Selmer PA 100 Watt amps, Vox Continental organ, then the stars Red Fender 63 Stratocaster, Ludwig Drums with Zildjian Cymbals. all set up on the dance floor, no stage.

In the dressing room writing a set list, not easy, we were due to play for three hours split up into three sets. Had to use the old chestnut; rely on phantom requests.

New news, we are supporting The Barron Knights. We were working ourselves into the ground and what do they come up with? Call Up The Groups. I had the feeling the Americans just didn't get it.

We played on, late into the night, Soul fans on one side, Surfin' fans on the other, us smack bang the middle. The only light relief, the girls were brought in by bus from the surrounding district​.
American Airbases were our main source of income during 1967. We used to go out for between £12-£15 a night, and out of that we had to pay 10 percent to the agent and there were other expenses. Regular Airbases for us were Lakenheath (supporting Billy J Kramer once) Alconbury, Greenham Common, and some RAF bases such as Uxbridge, Cosford and many others.

We also had an extensive list of London Clubs to play such as Hatchetts (Piccadilly) The Scotch of St James (SW1) Bag O Nails and The Speakeasy (W1).

I remember playing the Orchid Ballroom, Purley supporting Geno Washington and The Ram Jam Band. The other support was Winston's Fumbs.  Jimmy Winston was the original organist with The Small Faces and played on their first hit single What'cha Gonna Do ‘Bout It. After that gig I was in the dressing room and remember seeing Geno getting his money, £300, counted out in front of me in £1 notes.

Another famous venue for DMP was The Ram Jam Club in Brixton; well we just about got away with that one owing to having a female singer.

1967 passed and we had a chance to make a single record. The song was My Old Man's A Groovy Old Man, penned by Vanda & Young, better known as two members of the Easybeats who had a massive hit, Friday On My Mind. We never met them, the song was just given to us by a man called Jack Dorsey who was a record producer for the PYE label.

We rehearsed this song in a room over a pub in Dalston, Hackney. We were told by someone at PYE records that Fred should sing the lead vocal as his soulful voice was ideal. It was at this rehearsal that Jenni said she would be leaving the band but would still come to the recording session and sing backing harmonies.

Now we are back to our original lineup. It's mid 1967 and we have a recording to look forward to. Our very first 45 rpm.

We were getting more and more interesting bookings although still a support band. One standout gig was a support for Long John Baldry at the famous California Ballroom Dunstable. The Calli as it was known was the largest ballroom I ever saw, apart from The Palace Lido in Douglas, the Isle Of Man, which we would play many years later.

After our sound check the main man arrived with his band Bluesology. In his party there was Marsha Hunt, famous for appearing in Hair and Elton John. This was a few years before Elton made the charts. He approached me and asked if he could use my Vox Continental. No problem for me.

Our job was to warm the audience up, probably the most daunting. The ballroom was jammed packed and although we were above them they could see the white's of our eyes. I didn't get stage fright but was anxious all the same.

Well, Long John Baldry was amazing, his gift was the blues. He stood nearly 7ft tall wearing the pinstripe suit. The only other musician I saw wearing similar was Mick Taylor also playing the blues. No doubt about it, Mick Taylor is a blues guitar genius.

Marsha Hunt was a complete partner for Baldry. There is a twist in this story. After LJB's successful set Elton approached me in the dressing room, "So sorry I managed to break one of the keys on the Vox; if you get it repaired send the invoice to Dick James Music they will pay.” We took the instrument to Jennings factory in Dartford, repair done and true to Elton's word they paid up.

We were getting more and more prestigious gigs, a far cry from American Airbases, including The Flamingo and Whiskey A’GoGo, both in Wardour Street W1. The Starlite Ballroom, Greenford supporting Ben. E. King. Guildford Civic Centre backing Mary Wells. This was the beginning for DMP to eventually become a backing band and having their own career.
Powered by