HELLO GIRL, Number 1 in South Africa!! I would have gladly swapped this for just one Top Twenty entry in the UK charts. We could not capitalise on that success as we had no communication from the management. Once the band had split it was too late to reform. We were all starting new careers. I think even if we tried, because the heart was knocked out of us, there was no passion left to work with. Thinking about the overall picture now, taking into account the Apartheid situation then, it probably wouldn't have been possible to follow up this success.

I lost contact for quite a while with the other lads. The feeling I had was one of what it might be like when a family breaks up. We had been so close for six years, experiencing the ups and downs of life on the road. This was tough at times although what got us through was our ability to laugh a lot. I remember all four of us plus our roadie sleeping in one room in a small house in Nottingham. In that room were five beds, one mirror, one sink. I have some pictures of this time. Another place I remember was the Greenhall Whitley Brewery in Warrington. This was a massive site and we stayed in the very small attached pub on the main road. The rooms were extremely basic. We stayed here for a week, having been booked for cabaret with Billy Fury at the Towers. One or two nights would have been bearable, but a week? I particularly remember the cooked breakfasts. One morning the sausages were barely warm, well instead of complaining we saved them and buried them later in the garden. We didn't want to cause any waves in case we were told to leave. It was very cheap to stay there and money was always a great concern. We did put up with some difficult situations; life on the road was like this.

Another occasion I remember was the gig at Uttoxeter Race Course. We had been there once before and had a great night. Our changing room this time was the communal kitchen. We were ducking and diving getting into our stage clothes whilst food was being cooked. However, I must say these conditions were not as bad as some other clubs where toilets as changing rooms were commonplace. Anyhow we played our set at the racecourse and we had our contract with us, so it  should have been no problem getting our money. When pay time arrived the promoter refused us cash payment. He told us there were fewer paying customers than expected and he stood his ground even though he was in the wrong. The argument spilled over to the alleyway behind the club. It was late and we were tired and fed up. The bouncer then turned up and stood between the promoter and the four of us; this was stalemate. The contract stated cash, he wanted to give us a cheque. Well, we had so many bouncing cheques over the years, we knew this was not to be trusted. Situations like this made the journey home seem much longer. I can't even remember getting paid for that one. If that had been The WHO, Mr Trouble would have arrived and all would have been sorted.

Wherever possible we would travel back to London after a gig, and often I would get dropped off in Laycock Street in the early hours. There are so many stories to be told. I have to look at an atlas to recall the cities and towns we played in. Even now it surprises me how far we travelled over those six years.

I readily made the decision to turn my back on the music business. I was fed up having very little money and living day to day. Luckily I had good people around me giving their support. I think I was in a state of musical depression. I couldn't even watch Top of the Pops. I actually felt sick at the thought of that programme. This feeling lasted for many years after. Now, I think counselling would have been a way forward. I banked everything on our success.

I joined William Hill full time in December 1973, and really enjoyed working at 97 Essex Road. The pressure was off as far as money was concerned. I could walk to work. Working with the public was no problem. The job to begin with was simple, I just had to have good concentration and good hearing. The manager Gilbert was easy to get on with. One thing I noticed, it was a relatively new business as far as betting shops were concerned. {William Hill bought out The Hurst Park Syndicate, a public company with a group of betting shops [Sam Burns & Terry Downes] - Ed} Best of all, my favourite phrase from the manager in the winter was, "Off You Go, Son". Racing finished around 4pm then. I needed the discipline of full time employment and regular money. The honeymoon was over. No longer would I hear those familiar words "Why Don't You Get A Proper Job?” Had to get my hair cut, too. I was also surprised as life became a lot easier then. I am now retired from William Hill and have a great family.

One problem we did have was when we changed accountants. In the early days the accountant we used was a small time business at the Angel. When our management thought we were going places they persuaded us to change to their people. Well, as we eventually found out it was a mistake. These new accountants had a prestigious address. On our first visit , we entered the building and straight in front of us on the wall was a large picture of Elton John and some other names on the A list. We were obviously in the wrong place. Our fears were justified at a later date.

I like to think that 1967-1973 was my joyride. I know I was really lucky the way the cards were dealt to me. We never had a real plan to take the band in a particular direction, we stumbled from situation to situation. I have to say this way was quite exciting. There must have been hundreds of groups travelling in Ford Transits up and down the motorways of the UK. We passed and saw many. There were the usual meeting places like The Blue Boar service station on the M1, where, in the early hours of the mornings, we were glad to eat the stale baked beans left on the heat from the previous breakfast. Travelling along deserted roads for miles and always waiting for the thud, which could be the van breaking down. These were fairly regular occurrences. We had more than one big-end go.

I still have my Hohner Pianet N, the keyboard I played on stage and on some tracks on the second album. I don't think the samplers have successfully created that unique sound - well I've not heard any. Keyboards were pretty basic back then, especially electric pianos but the N had a good amount of attack. We are spoilt for choice now. I liked the Roland's so got one in the 90’s even though the stage pianos are really heavy. However, I think that they do have some great electric and acoustic piano samples, but with average organ sounds. I like the new Nord as that company have successfully sampled the Hammond B3. The Nord is very light in weight and can be lifted under one arm. 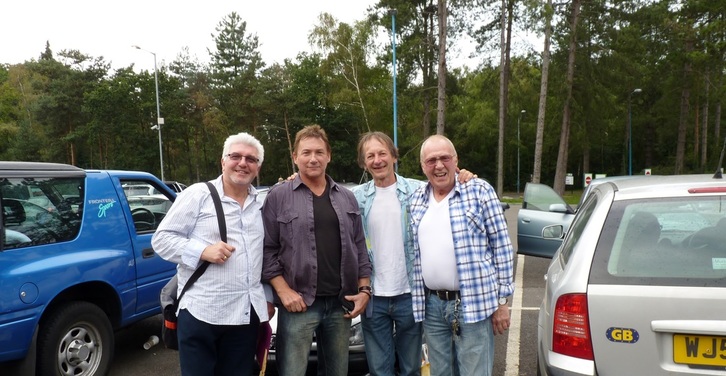 We all met up for a reunion at Fleet Services on the M3 in 2010, forty three years after we formed the band. This was ironic really, seeing as we spent so much time on motorways and in service stations. The picture attached to this article is from that day.

Music History for Andy White. [Andy White died November 2015. He also played drums on the Beatles' Love Me Do. Believe Ringo had to play tambourine - Ed] He played drums on the famous Billy Fury album ' The Sound Of Fury '. It's well documented that Billy wrote every song on that album, something the great Elvis never achieved. Seeing as this was back in 1960, I think it's well worth thinking about. I also think Billy lost his way soon after, as his manager steered him away from rock and roll. Billy made many great ballad records some which were very successful and made good positions in the charts.  Amazingly, he never had a number one hit record. It is well known that Joe Brown played guitar on ' The Sound Of Fury ' and I believe that he and Billy were great friends.

With thanks to the Telegraph.
Powered by