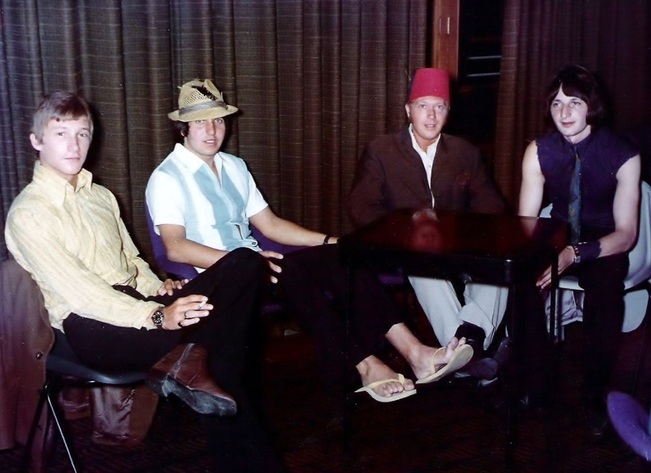 In the summer of 1969 we were introduced to The Chantelles, a British girl harmony trio. They evolved from The Lana Sisters who in the late fifties included Dusty Springfield. The Lana Sisters had several record releases and appeared on television in Drumbeat and the 6.5 Special. Riss Chantelle (known as Iris Lana) left and formed The Chantelles with Sandra Orr and Jay Adams. This was the trio I knew. The Chantelles discography dates from 1965-1968 and their single, There’s Something About You has become a staple of the Northern Soul Scene.

Dr Marigold's met up with them at a flat in Southgate, London for a first rehearsal prior to our working on P&O Liners. We took along one guitar, a pair of drumsticks and a set of bongo's. It was an informal meeting and the girls were very friendly. We had more tea than rehearsing. We never had a written contract and were going to sail on the Iberia, sister ship to the Arcadia.

Our terms and conditions included opening the show in our own right and backing the girls. The Chantelles set lasted around thirty minutes. The nice thing for us was we had lot of time to ourselves and we never had to play every night. For this we would receive £25 a week each, a first class cabin each and dining in the first class restaurant. This was a step up from Laycock Street; new territory. I had to buy a tie.

The Iberia seemed huge although nowadays it would be dwarfed by the new liners. After unloading the instruments we found our cabins which were very nice. We were on our way to the Med and were booked for about three months with short breaks in between. Usually the holidays lasted two weeks, Southampton return. The holiday mood started soon enough with the Royal Marines playing us away. Holiday IS the word. It was one long holiday. 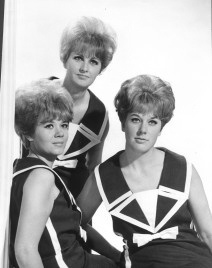 The first rehearsal call on board threw up a surprise. These girls sang some of the best harmonies I had ever heard. The hardest job we had was transporting our heavy amplifiers from the front of the ship to the aft and back again. This had to be done outside along the decks, not an easy task whilst sailing through the Bay Of Biscay.

I couldn't believe my luck, I was sailing the high seas. Twenty one years old and there I sat at a table in the first class restaurant with my four mates. Far removed from the Cock Tavern at Highbury Corner. Here something happened that made me look twice. A girl aged around thirteen came to her parents table and curtsied to them. I believe there were titled people on that ship and there we were, local boys made good. They moved us soon after to a table in the corner of the restaurant. No explanation. I can only think it was something to do with loud voices. We didn't care. The whole experience was like a dream. 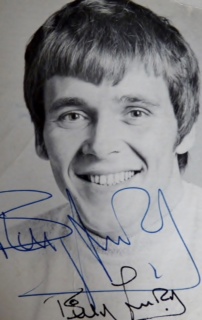 After our gig on the Iberia we met up again with Billy Fury for a recording session in a Paddington studio. The session ended with us backing Billy on six songs. We never heard anything about this session until I had a conversation with someone who was running a Billy Fury fan club in 1998. Nearly thirty years had passed. Three of these songs are Halfway To Paradise, I Saw The Light and Let Me Go My Way, which are on the Missing Years album. The other three, Driving Nicely, I Love You and Lazy Life are all on the cd Rough Diamonds and Pure Gems. Billy paid us £200 in total for the session.

There is something I have just remembered from 1968. Billy bought a horse to run in the Epsom Derby and he named it, 'First Rate Pirate'. He had already had a runner in the 1964 Derby. This was Anselmo which finished 4th to Santa Claus. We decided to go there and watch the race, driving to Epsom in our old Commer van and parking it on the Heath opposite the Grandstand. We stood right by the finishing line. First Rate Pirate showed in the early stages so got a mention but he finished in last place true to his odds. The winner was Sir Ivor ridden by the great Lester Piggott.

Back with the girls we sailed on the Chusan, a much smaller ship. This was a three week cruise to the West Indies over Christmas and New Year 69/70. Our bass player had to miss this trip. We were introduced to another musician, Tim Greenwood who joined us to play bass. Tim was a Singer/Guitarist. His forte was folk music and he did his own spot, as well. Tim's brother is Nick Greenwood. Nick was the bass player in 'The Crazy World Of Arthur Brown' and played on the hit, Fire.

There were some other great musicians playing on this cruise namely The Don Airey Band. Now Don went on to play keyboards with Rainbow, Deep Purple and Garry Moore. Don has a brother Keith, another great guitarist. I saw him playing in the Tom Jones Band.

After all this we had one more gig with the girls and this was on the flag ship Canberra sailing around the Med. Other musicians on this cruise included 'The Harry Stoneham Band' who were resident on The Michael Parkinson Show. Those months were a revelation to us as we saw another side of life.

After all this excitement Dr Marigold's Prescription were about to embark on a fairly long recording career which would include appearances on TV and many Radio One broadcasts.
Powered by