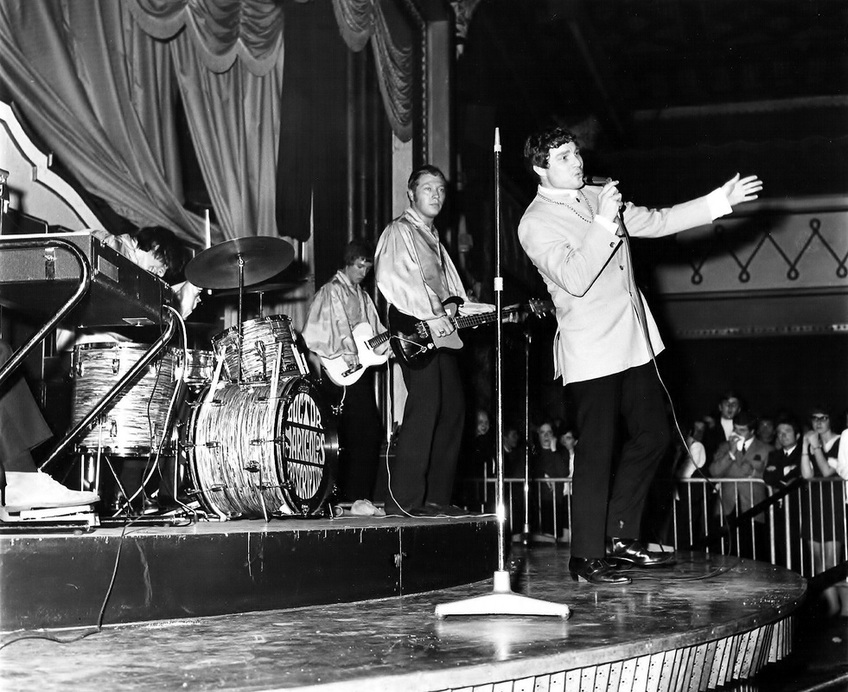 We arrive at the famous Tottenham Royal Ballroom. BRUCE CHANNEL American Singing Star cried out from the poster. Music history has already been written here over the years. We set up the gear on the revolving stage. Barriers were being set up on the dance floor in front of that stage. Security became the name of the game. I thought 'Who On Earth Was Going To Storm The Stage?’

I've just this week been reminded by Bill Friend, Bass Player, that the famous Denny D'ell of 'The Honeycombs' was there behind the scenes. Rumour has it that Denny fetched Bill a glass of milk. The Royal was a welcome venue for us, it was like a home match; we hoped to score all three points (or two points as it was then). 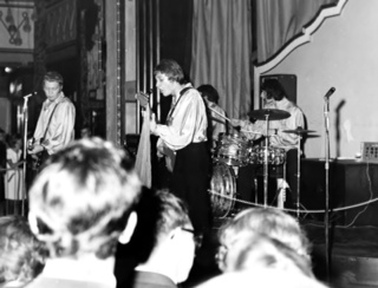 Among our travels with other stars we also had a career of our own to carve out. In between those prestigious gigs we were still working under own name. One show I must talk about is when Dr Marigold's Prescription opened for the Small Faces at The Guildhall in Portsmouth. Our van had broken down. The agency who booked us found a replacement along with a driver. Now at this time there was flooding along the route to Portsmouth. The River Mole had burst it's banks. After a few diversions we ended up in a traffic queue and time was running away. Our nice driver that day was getting agitated as we had a schedule to keep.

Bill Collins was the name of our driver, his son was the famous actor, Lewis Collins. Bill told us about the group that he managed The Iveys. This must have been around the time when the group signed to Apple, then changed their name to Badfinger. Stuck in traffic, going nowhere, Bill actually drove along the pavement, no messing about. We arrived in Portsmouth just in time. The bonus for us was Bill Collins carried all the equipment from the van to the stage. My lasting memory of him is eating his way through a bag of plums whilst driving. Only a small thing but sometimes those memories are the best. 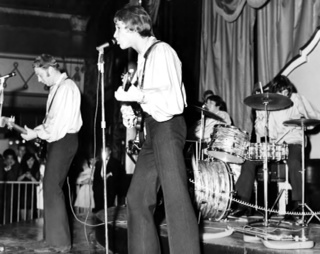 This gig in Portsmouth with the Small Faces was a real step up for us. One song we may have opened the show with was 'Light My Fire' the Doors version. While we played our set we knew there was a party going on backstage. One thing TSF liked was partying. Once they started playing the whole of their set was an extension of that party. They were amazing and more. I watched from the side of the stage.

Another support show of note was at the Colston Hall, Bristol. Top of the bill that night was Dave Dee, Dozy, Beaky, Mick and Tich. Now the stage at the Colston Hall was the longest I ever played on. Dave Dee was a great front man. They had hits all over the world. When he picked up that whip during The Legend Of Xanadu screaming ruled. The only front men I saw who bettered Dave Dee were Reg Presley and of course, Screaming Lord Sutch.

Back at the Tottenham Royal we watched the crowds building up. My memory tells me the Royal was a massive dance floor, not much else apart from the revolving stage. It took some doing to fill it. Bruce had already had a number 1 hit record with Hey Baby. He was back in Britain with a new release Try Me. Keep On was released earlier in 1968. I now have to rely on heavily on my memory. As far as I remember we first met Bruce Channel at the Granada Walthamstow. We were up on the stage and he walked down the middle isle towards us. He was with a man called Roger Easterby. Now Roger worked at the Arthur Howes Agency in Piccadilly. He had close contact with the BBC and would later become our manager. Bruce was a real nice man.

We had already learned to play Bruce's songs, copying them from actual recordings. Bruce was typically American, no problems with anything, always looking forward and extremely positive. The show in Tottenham was a success. I must say sitting on that stage I did think at some point of The Dave Clark Five who made the ballroom famous. Among the songs Bruce sang were Mr Bus Driver, Keep On, his new release Try Me and of course, Hey Baby. Other venues with Bruce were in Scotland, Nantwich in Cheshire and the famous Cavern in Liverpool. This was a memorable occasion. The Cavern is well documented, but unless you have been there it's just a mere thought. I enjoyed sitting in the dressing room even though it was extremely tight for room, but to make up for that, seeing all the famous names etched into the brickwork was a great experience. It was very cramped on stage and the sound seemed to disappear. There was a strange smell in the Cavern, almost like drainage. Anyhow WE WERE THERE something to always remember. Another gig we played with Bruce was the Tudor House in Bearstead, Maidstone, Kent. It was a regular venue for groups like Vanity Fair and Chicory Tip. It was here that we heard that Bruce was to marry a girl who worked at the Arthur Howes Agency. Now for me that is a nice story.
Powered by