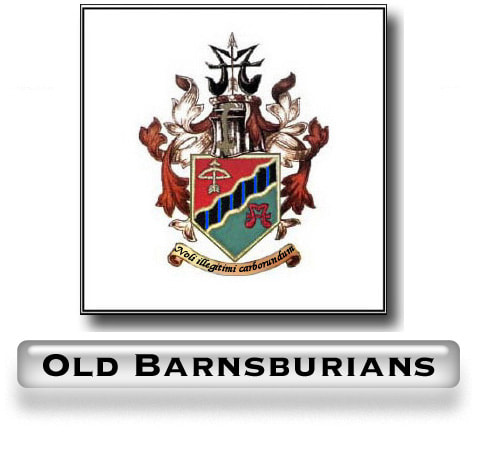 We intend for this site to be a historical archive of our school. Photographs, memories, anecdotes and anything else you care to offer, will all be presented here. We would like to include your personal stories about Islington as well; the common bond of our childhood being the main denominator. For obvious reasons all postings must be in the body of an email and will go through the editors. Please use the following two email addresses:

The email lists of members that we use now will stay in place as we have no facility for social interchange. Any old Barnsburians or connected parties chancing upon this site are welcome to join.

In 1903 Islington had nine secondary and higher educational establishments administered by the Board of Education, including evening classes at two board schools. In 1904 the first higher grade school was opened by the L.C.C. at Barnsbury Park, followed by Camden secondary school in 1907. In 1908 four private secondary schools were recognized as efficient of which Highbury Hill High school was taken over by the L.C.C. in 1912. Higher grade classes in elementary schools were gradually replaced by separate central schools. From 1927 most Islington council schools were reorganized into senior and junior schools, though a few all-age schools, many of them denominational, remained to be adapted after the Second World War. The London school plan, drawn up between 1944 and 1947, laid down a complete scheme of primary and comprehensive secondary education but included several aided grammar schools which remained outside the reorganization. By 1955 Islington had 36 council primary schools, some divided into separate junior and infants' sections, 12 voluntary aided primaries, 16 country secondary schools, and 5 voluntary aided secondaries. Some single-sex secondary schools were amalgamated into mixed schools in 1957–1959; former grammar or high schools remained single-sex but had become comprehensive by 1982, again taking pupils from other secondary schools. 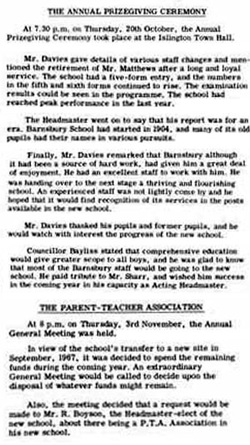 As described in Wikipedia, Highbury Grove School began life as an all-boys comprehensive in 1967. It was created out of three former boys schools in the area: Highbury Grammar School, Barnsbury Boys School, and Laycock Secondary Modern School, as part of a comprehensivisation scheme by the then Inner London Education Authority (ILEA). The founding headmaster was Dr. Rhodes Boyson.

Boyson introduced a regime of strict discipline, including caning for misbehaviour. Excellent academic results were achieved, and the school was soon heavily oversubscribed.

Boyson left in 1974 after being elected a Conservative MP. In the 1980s he was to become an education minister under Prime Minister Margaret Thatcher.

The adjacent text was taken from "The Barnsburian" school magazine, Volume 7, 1966, describing the Headmaster's comments prior to Barnsbury's move to Highbury Grove, his acknowledgement of Mr. W. S. "Bill" Matthews retirement and the winding up of the Parent-Teacher Association in readiness for the school's transition. 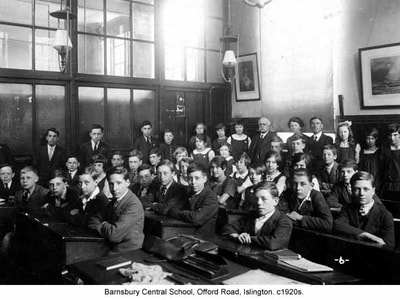 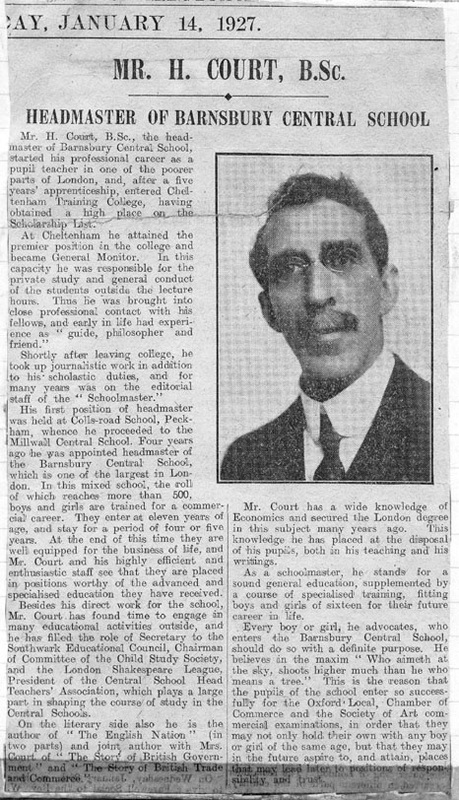 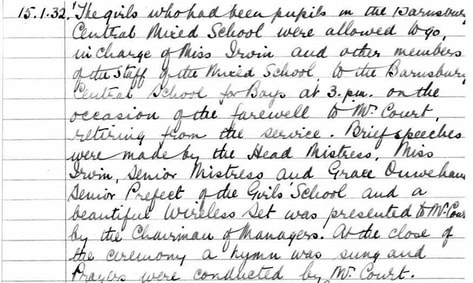 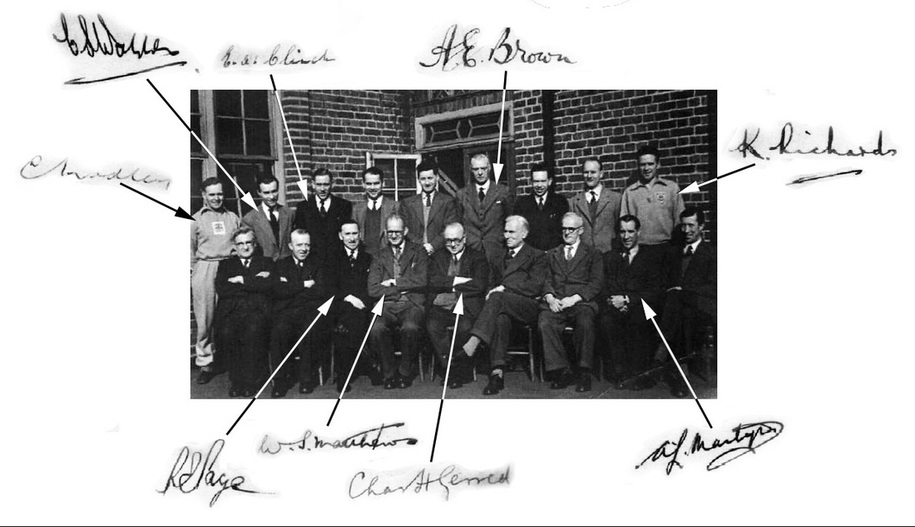 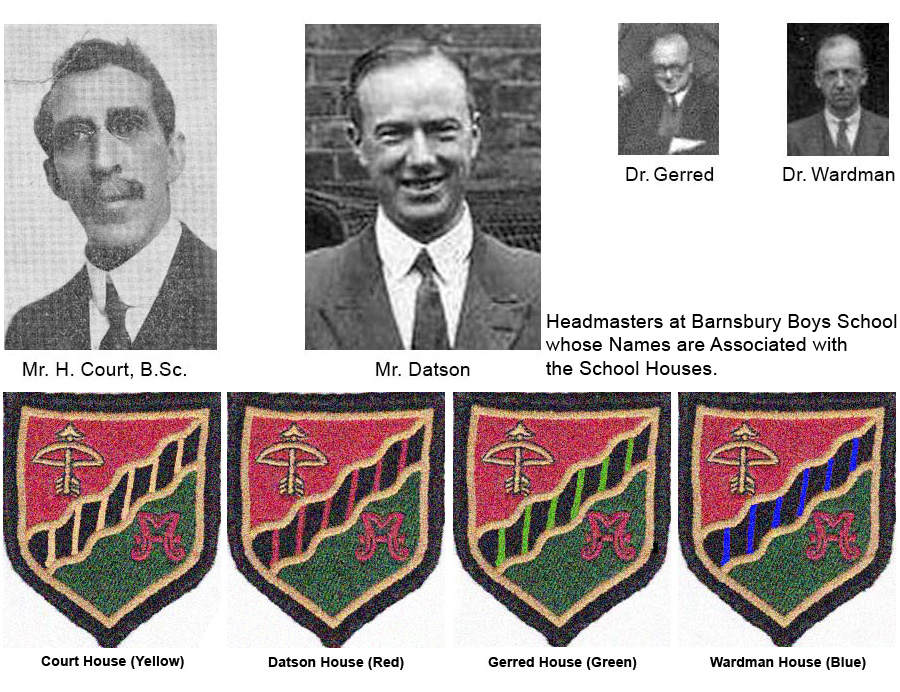 Dr. Wardman left Barnsbury in 1950. There was a deep loss when he left and presumably retired.  He was the total embodiment of, and fostered, the Barnsbury Boys School spirit.  A good Captain. 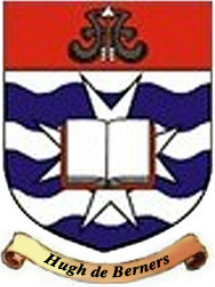 The Barnsbury Boys School badge shows the association with Islington landowners after 1066 and the importance of archery in the area.

On the top left, the longbow symbolises the past association of the area with archery. The parallel diagonal gold wavy lines across the centre of the badge represent the New River which runs through Islington. The vertical bars connecting the two wavy lines depict the four house colours. Oddly enough, the Barnsbury Girls School badge is similar in design, but has only a single gold wavy line across the centre. On the bottom right is a water bouget, a device taken from the Berners family coat of arms (see left).  A water bouget is a pair of leather skins carried on a yoke and used by soldiers to carry water.

In 1086, Hugh de Berners, who came with William the Conqueror, was rewarded like many Norman barons with tracts of land for his part in the invasion. It is therefore likely his reward was for controlling the carrying of drinking water for the conquering army in 1066. Hugh de Berners held the manor of Barnsbury (also called Bernersbury or Iseldon Berners) a description taken from the name of the family. The Berners family retained the manor until 1502 when it was sold. The manor house was situated to the west of what is now Barnsbury Square.
(Courtesy of John Tythe). 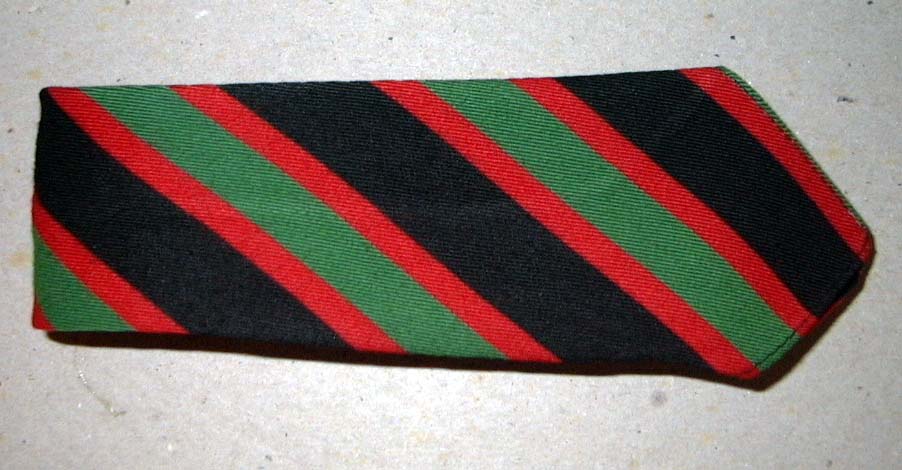 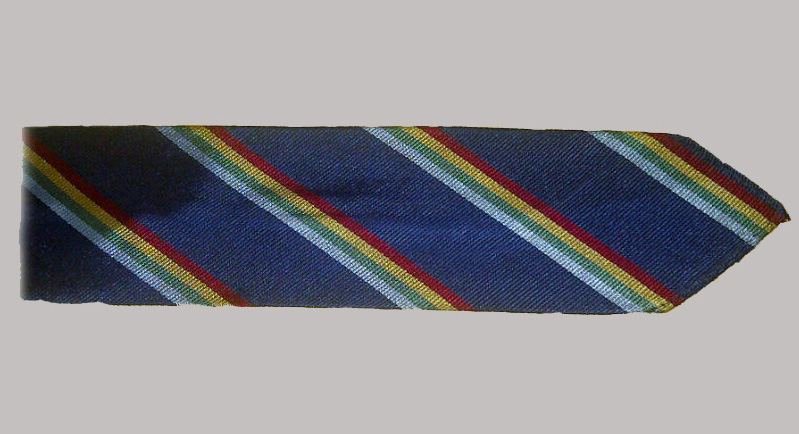