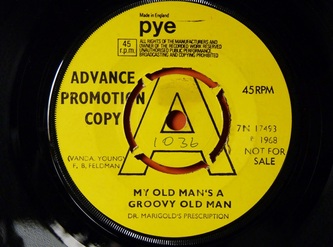 ​It was 1968, we were playing two 45 minute spots at Silver Blades Ice Rink in Streatham, South London. After the gig we drove to PYE Studios, Marble Arch, London to record our first single, "My Old Man's A Groovy Old Man”. We were absolutely shattered. New energy had to be found.

We were allowed a quick run through to get the feeling of the studio. As this was our first time in a recording studio we could have been out of our depth. We put the backing track down first, then Fred sang the vocal over that, after which, Jenni included, we put down the harmonies. There wasn't any time left to listen to the finished product. The session just flew by. One of my ambitions had arrived. 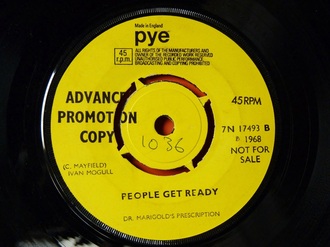 There wasn't much airplay apart from a plug on Radio Luxembourg on the Kid Jensen Show. I listened in but the reception on my radio was poor. I managed to hear the record though and afterwards Kid Jensen said, "Success is just around the the corner for this band.” Well, I went and had a look; nothing there!

The record was next played on Radio One, on a programme where new releases were aired and celebrities gave their opinions. Suzi Quatro said, "Sounds as if the singer has been gargling with pebbles.” We took that as a compliment. Now we all had a 45 rpm disc of our own. 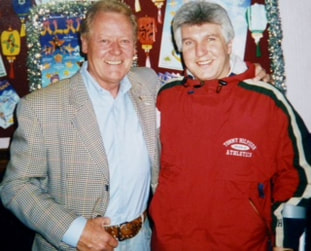 I don't remember the circumstances but DMP had a chance to back Craig Douglas in cabaret for a week. Taking up the offer we drove to Newcastle, staying in digs and surrounded by all sorts of characters. We never rehearsed with Craig because he had the music sheets and we could all read music, so no problem there. This gig taught us a lot about audiences which stood us in good stead for the future.

Craig's set list included typical cabaret songs; for example, ’Can't Take My Eyes Off You' and of course his smash hit, 'Only Sixteen.’ He was a great bloke, one of the lads. We laughed our way through the week and got to see Newcastle. We were then booked for another week with Craig in Wakefield.

After all this we were back in London. With a record release that was fading on sales, we had to get some work. Sitting in the office at The Arthur Howes Agency in Piccadilly, someone called out to us, "Would we like to back Billy Fury?” Now Arthur Howes was the real thing. He put on all the Sunday concerts back in those days.

Becoming one of Billy's many backing groups would take us to the next level so we immediately accepted. And we weren’t wrong, it proved to be a really great experience.
Powered by