James Sanderson
In 1963 the opportunity arose to go on a school holiday to Lloret de Mar in Spain.  As with the skiing holiday the year before, I paid half the cost out of my paper round earnings and my mum paid the other half. I took my own spending money. My old man was nowhere to be seen.

We travelled down through France by coach and it has to be said this holiday wasn't as memorable as Champery. No events or anecdotes really stand out.  Watching incredulously as the Spanish women washed their clothes on the beach in the streams running down to the sea. Johnny Payne, in goal, getting knocked out as we played soccer against the Spanish boys on the beach. We threw him into the sea to wake him up. Going to Barcelona and the fact that there were no public toilets anywhere! We bought cokes in a bar and I pissed into a hole in the ground at the back. I remember one boy didn't go all day and during the coach journey back, constantly moaned in pain, especially when the coach went over the bumps in the road..

I roomed with Bill Hunt and Micky Sonnex and that went all right until the day I had a siesta and caught one of them leaving the room stealthily. I had no idea what they had done until I put my plimsolls on and walked down the stairs into the courtyard where we hung around and played table tennis. As I walked through the door I suddenly realised that my feet felt ‘squishy’. The bastards had put toothpaste in my plimsolls.

In January 2002 I contacted Bill Hunt and he reminded me of an incident where the Spanish shopkeepers had complained to our teachers - "Tosh" Chamberlain, who was only interested in raising his right elbow and Mr. Campbell, who was getting excellent therapy working with us young lads - about kids nicking leather goods and such from their shops.

Campbell spoke to us all and said he was sure that we were not involved but that there would be an amnesty and he would leave his bedroom door open so that any boy who wished to return something they had not paid for, could leave said goods on his bed. As Bill said, there was a mountain of stuff and Campbell was nearly in tears that his boys could do such a thing. I initially remarked to Bill that I did not do anything like that but in the back of my mind I think I might just have done! Following the herd, you see. It shows how some people remember one thing and you remember another.

Alan French
I was there, James. I remember sitting on a stool in a bar I think was called the Miramar. The bar was a circle, I leaned back on the stool messing around and grabbed a rail underneath and got an almighty electric shock which threw me backwards off the stool. How lucky was I? I mentioned it but never made a fuss. No idea if anything was ever done about it.
​
There was a boat trip I think to Tossa Del Mar; on the way we passed Blanes which is now a major yacht marina.
If you are talking about John Payne the goalkeeper, (I am - ed) well he was a real good keeper. If my memory is correct he lived in Caledonian Road.

Gordon Donald
I was on the Lloret De Mar trip, I shared a room with Alan French, and a Chap called Jacobowski (I can't remember his first name), I also remember the "nicking" that went on in Lloret...! I also remember that a lot of us bought flick knives..!. I also remember that one lad had his swimming trunks taken off him for some misdemeanor, and he resorted to his underpants, that drew the attention of one of the Guardia Civil. One night we saw Chamberlain lying in a bar totally drunk (the bar had a barrel as the door, and the "curtain" was made of string, with folded bottle caps)
It was a great trip......

Russell Profitt
The trip I was on to Lloret de Mar was in April 1965. We went by coach via Ostend, Belgium and then on via Narbonne, France.

Rob Drew
I do believe that I was on the trip to Lloret, along with Ray Dowdall and Richard Hill. First time flying for many of us, especially in what I think was a 'Bristol Superfreighter’.

Macon sticks in my mind for all of the entertainment along the river, and when I tell people how Lloret was just a small fishing village and not the 'Blackpool in the sun' that it turned into. It also formed my affection for 'Cuba Libre’.

I also remember having to wash the coach in Lloret, as someone had written 'Barnsbury' on the side and it had scored the paint job.

I know that the trip formed my affection for the country which continues today...

James​ Sanderson
What a difference a school year made. The younger boys often knew who the 'big' boys were, but it was generally the opposite for the boys in the senior years. Think I only remember about five boys out of the 40-odd that Pete Berry alleges went on the trip.

What I definitely do not remember is washing the coach because someone had written Barnsbury on it.

Remember the plane though; my first flight, bloody noisy props. Won't fly now, just drive down to the docks and sail away.

Jim Skinner
I do remember the Lloret de Mar trip and particular recollections still strong include:

The poverty (before the town was developed) with people washing their clothing in tiny streams;
The overnight stay on the way back in Rocamadour built on the side of a canyon;
In a bar (almost like a cavern) in Lloret, me slightly (sic) under the influence dancing to “Let’s Twist Again” on a table!
The visit to the Barcelona Football Stadium.

Believe there was an overnight stop in Avignon on the way down.

James Sanderson
Just received this from another member who was on the trip.

My abiding memory of this trip was when the “gay” teacher, Mr Campbell I think, got us together to advise that the local shopkeepers had complained of significant levels of shoplifting. There were a number of schools in Lloret at that time and he was sure Barnsbury lads had nothing to do with the shoplifting. However, he said that in the event anyone had been tempted he would declare an amnesty. His bedroom would be unattended and the door left open for a specified time during which any items may be returned and placed on his bed. I recall looking into his room a little before the amnesty closed and you could not see the bed for leather and other goods. Although he was disappointed at the outcome he was true to his word and no more was said on the matter.

Gordon Donald​
I was on that trip, shared a room with Alan French, and a guy called Jackowbowski. I can confirm all of this although as I remember it all started with a local shopkeeper who was English, who went to Campbell and said if everything was returned the Guardia Civil would not get involved. 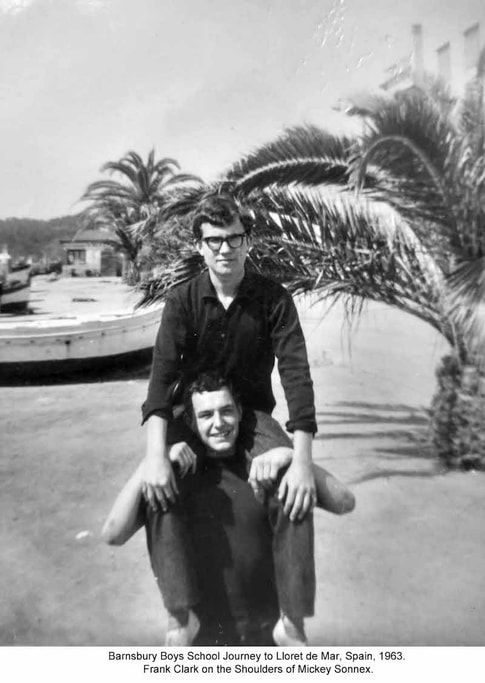 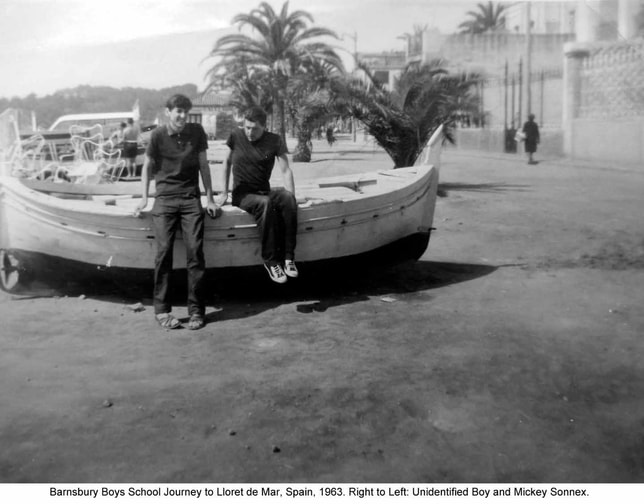